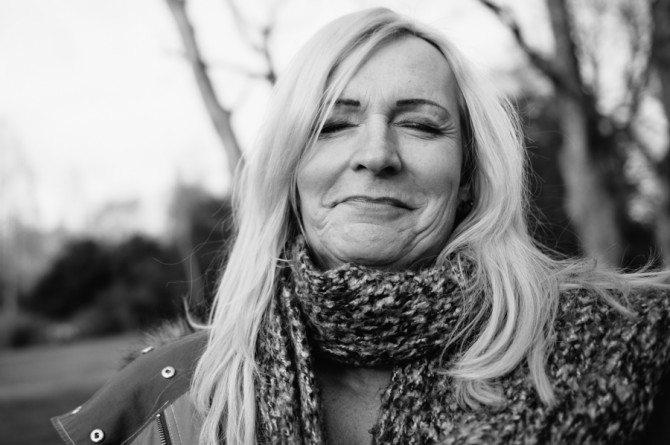 A tall, good-looking, well-dressed woman enters the café. She approaches my table, ‘here in Düsseldorf, you can’t find a parking space at all. That’s madness. I am now parked in front of the Steigenberger Hotel. I charmed the boys who stood there. That went well until I spoke when their eyes turned big as saucers. That happens to me a lot, but I was allowed to park anyway.’ Petra smiles.

It is too loud inside the café for Petra. ‘Come on, let’s go out for a walk.’ 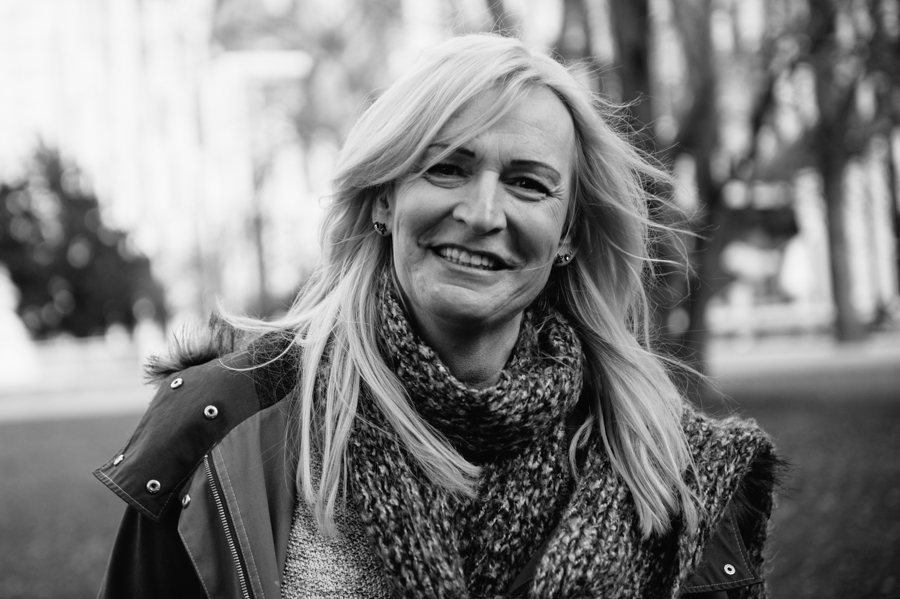 ‘Last week I wouldn’t have wanted to meet with anyone. I was severely depressed. Now it’s slowly getting better. It’s a constant up and down at the moment. More likely it’s hormonal.’

More than a year ago Petra and her boyfriend broke up. ‘My ex-boyfriend was an important part of the period of my life in which he accompanied me. As a hypnotherapist, he taught me a lot about finding my own self. When I wasn’t feeling well, he always told me to look for energy centres.’ Trees are such energy centres for Petra.
‘When I’m not feeling well, I think of my favourite tree and embrace it virtually. That gives me – in addition to my friends – positive energy and strength.’ 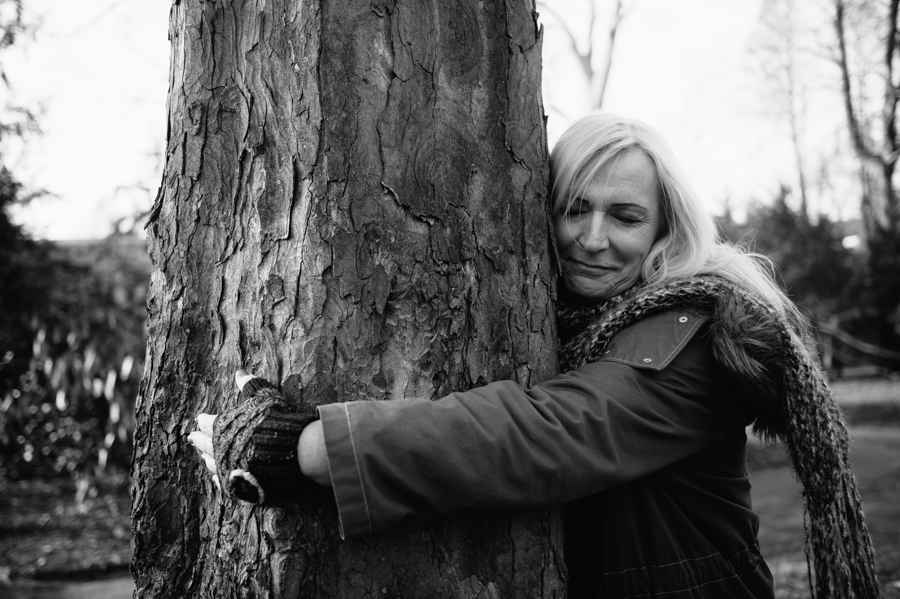 Petra was 42 when she started her transition. That was seven years ago. ‘Since puberty, I have consciously dealt with it. At first, I thought I was a transvestite and tried to live like that for a few years. That partly turned out a very rough time. Then came the certainty that I am a woman. Shortly before my coming out I almost got married. Luckily that didn’t work out.’

‘The young trans-women,’ Petra says, ‘are all in such a hurry. It’s important to stop now and then and reflect on what you’re actually doing. Does this still suit me? Is this really me?’ When the crucial operation is over, it’s too late. After all, the ‘gender-aligning operation’, or, as Petra calls it, the ‘gender-transforming operation’, cannot be reversed.

For a long time, Petra had excluded this surgery for herself. ‘Then one morning I woke up and it was clear that this was my path.’ Petra has had five procedures since then. That seems a lot to me. ‘But it is not. Most people just don’t talk about it out of shame if it doesn’t go well. Corrective surgeries are almost always necessary. Once you’ve decided to have this procedure, you want it to be perfect. And I want to live without pain.’

While we walk, Petra stops from time to time to take a closer look at something beautiful. A tree, a building, a monument. Petra loves to surround herself with beauty, to live the beauty of life and to do beautiful things. 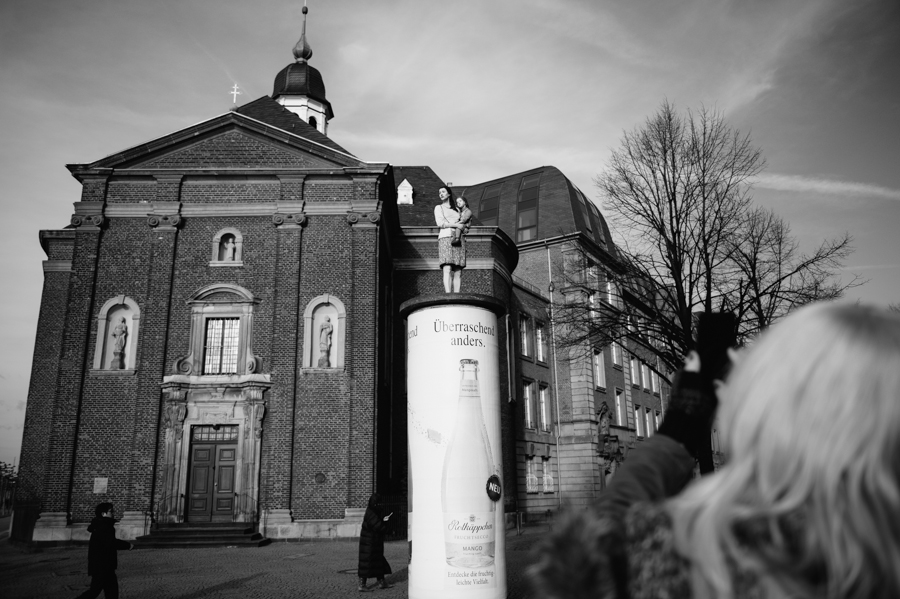 What many don’t know, ‘with the transition, you often exchange one bag of problems for another. Most of us don’t expect that. They think once they’ve had the surgery and everything’s changed, it’s all good.’

The expectations depend on the level of experience. That’s why Petra runs a website on which she reports about her experiences and also publishes useful things for transgender people and their relatives.

‘Since the transgender groups are reluctant to report negative experiences, many tend to take a somewhat naïve approach to the matter. I’m sure I do, too.’
Petra says the moment she finally knew what was going on with her was much more liberating than the gender reassignment surgery.

Petra is writing down her life’s story in a book, ‘It’s supposed to be a comedy. I’ve been writing it for 30 years. Of course, I also report the typical strokes of fate. But there are also beautiful and above all funny things happening in my life. I am not only transgender, but I am also a person with all the ups and downs.’

In the park, a lady walks past us on high heels. ‘That’s what I like. If I were 25 years younger and 25 kilos lighter, I’d probably be a real bimbo.’ Petra laughs. 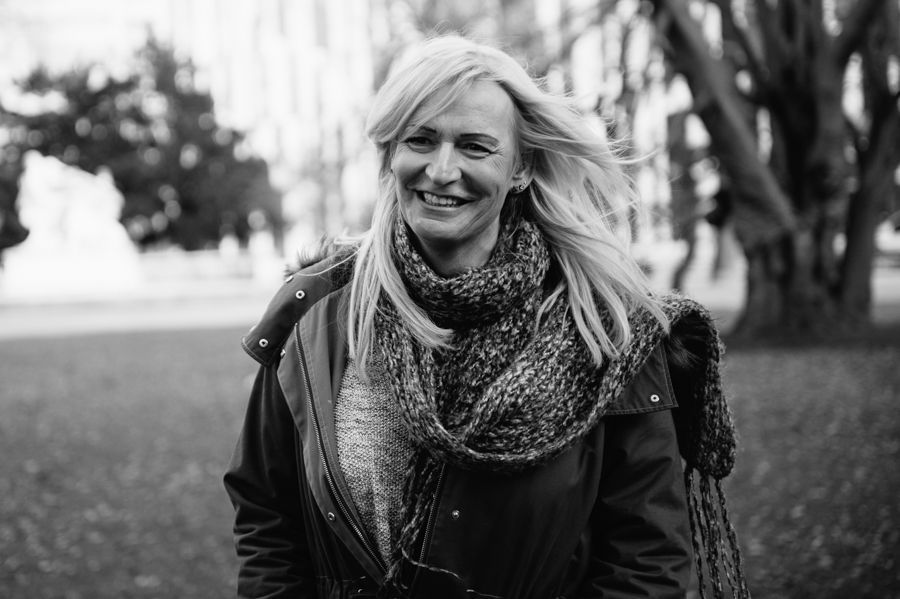 We do feel like a cup of coffee now. ‘Let’s look for a quiet café where there’s not much going on and we can talk some more.’ We end up at the Steigenberger hotel. ‘That wouldn’t be the kind of café I’d currently go to, the coffee would be too expensive for me. But it is nice here.’

Petra is enthusiastic about the shoe lamps on the side tables. She would immediately take one home with her. Together we look for a price tag – and find it. ‘No! They are crazy. I could do that myself.’ 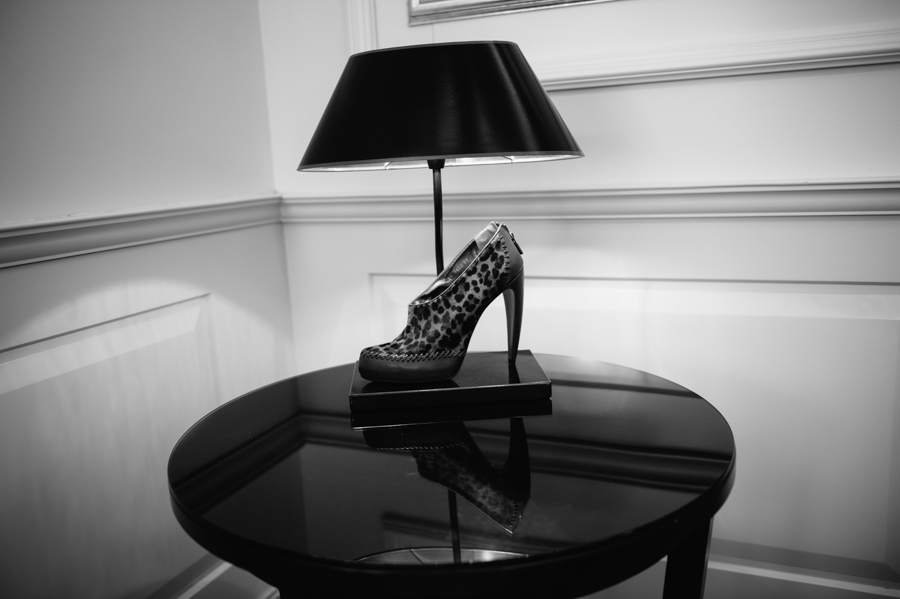 Petra would like to be in a new relationship.
‘Straight guys are very socially oriented. Most of them look for women who are presentable. Women march to a different beat. But I am not a lesbian. That’s why relationships don’t really work well for me.’

Petra has also been active on dating sites. ‘But there, you only have chances if you are still far away from 50 and not transgender. I always told the truth – until I realized that I was the only one. So now I cheat, too. Otherwise, it’s an unfair game.’ 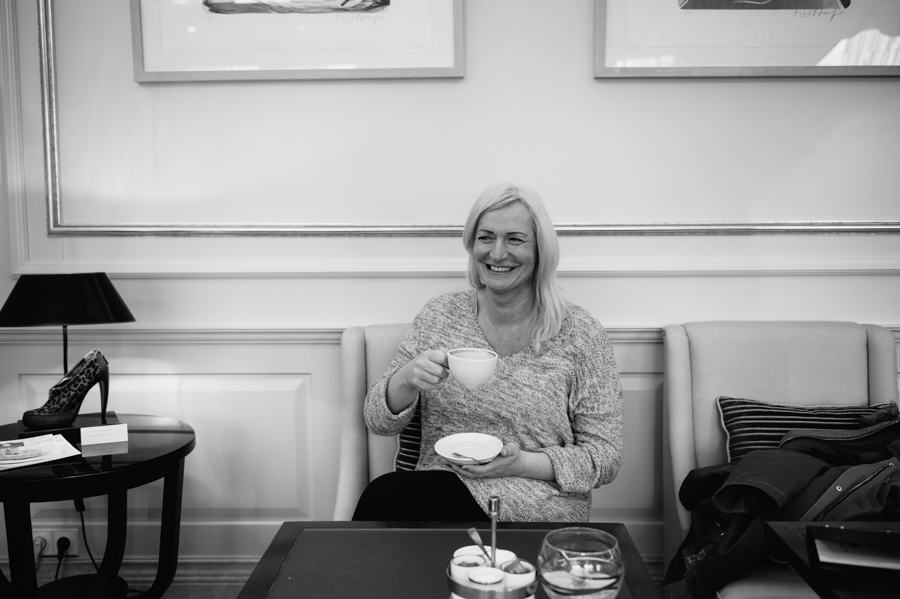 Petra finds it difficult to meet a man in everyday life. ‘There seems to be something that gives me away as a transgender woman. I recently made a survey among friends asking, “how do you recognize it?” Most of them didn’t dare to say anything at first.
Then some very interesting things turned up: “Your hands and wrists,” “Your way of walking,” and “how you drink your beer.” Well, I guess I played my part as a man too well for 40 years. I was a real macho man.’ 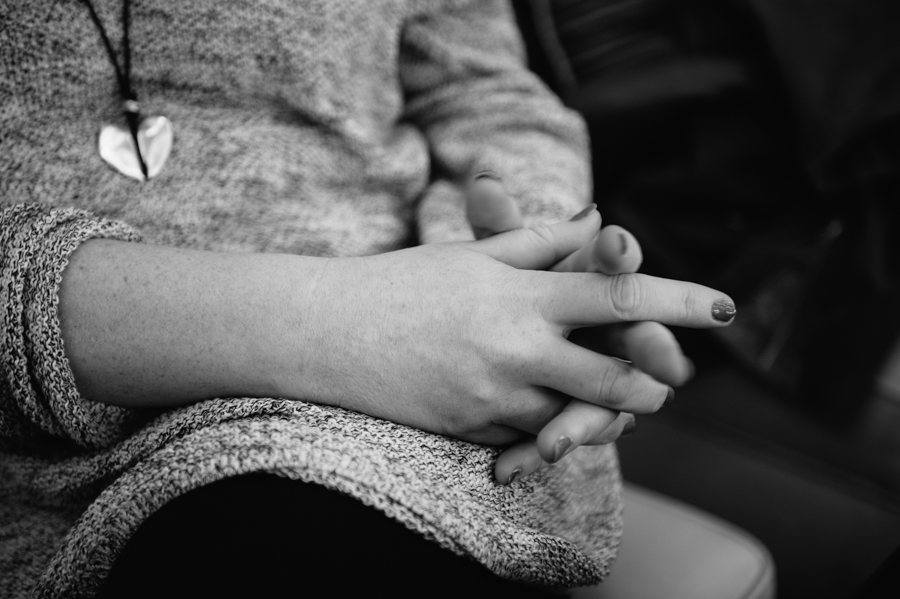 One event she regularly attended until recently was the ‘Kochpott-Guerilla’ (cooking pot-guerrilla). Once a month up to ten people come together in a private apartment in Mülheim to be cooked for by top chefs at a fantastic price. ‘The chefs try out their latest creations and receive honest feedback. So everyone gets something out of it.’ Petra loves to meet new people. And yet, ‘many people immediately reduce me to the transgender topic. But I also have other topics in my life. I am funny, I am entertaining. I am a human being!’ 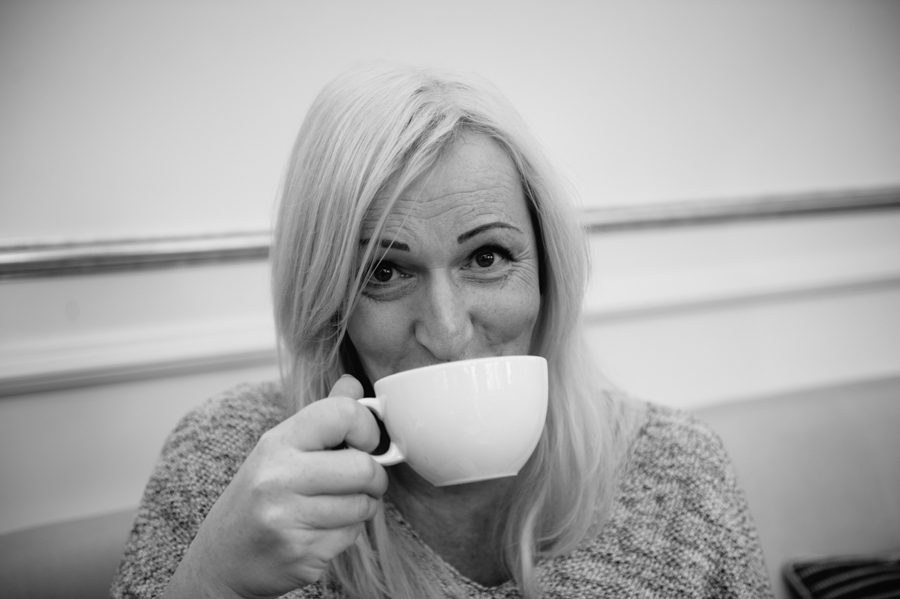 ‘At home, I have a whole wall with photos of me during the last 6 years. Once an astonished acquaintance stood in front of it and remarked, ‘you look really good on photos.’ That’s probably the most beautiful compliment I’ve ever received.’ Again her wonderful laughter rings out. 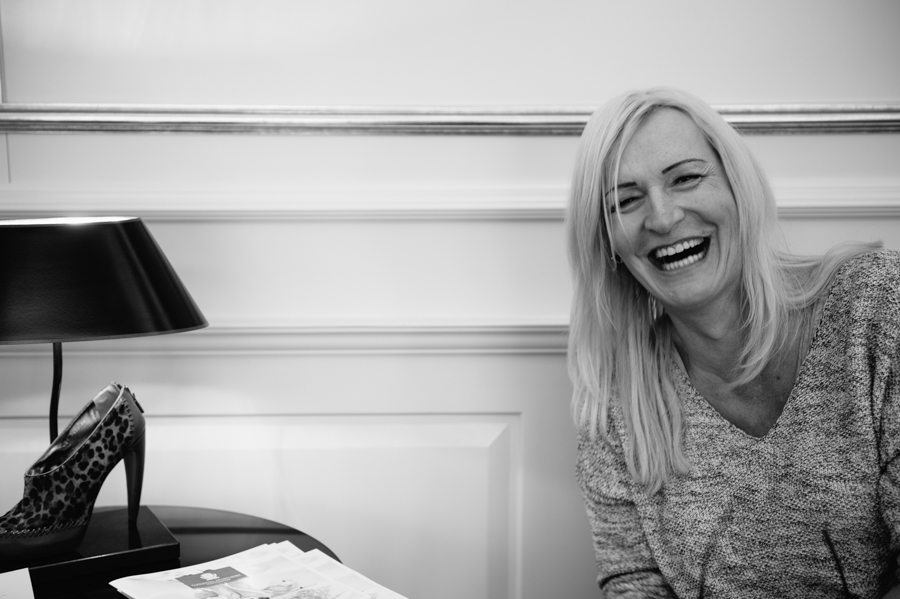 Petra brought something personal with her. It is a necklace. The first one she bought. ‘That was in my first phase when I tried to live it out secretly more than 35 years ago. There were several of these phases. But I always lacked the courage to go my way and I undid everything, threw away everything that had to do with it. Only the necklace I always kept.’

There’s a couple sitting at a neighbouring table. The young woman obviously had some work done. The nose, lips, and breasts don’t look real. Petra and I are divided, whether that is attractive or not. ‘If I had the money, I would get a lot of surgeries. I would start with having my nose straightened. It’s much too big. And then there is a lot more to be done. But that is independent of the transgender topic. I’m simply terrified of getting older. I’m really anxious about turning 50.’

Some time ago Petra made it to the final round of the show ‘Extrem Schön’ (extremely beautiful). They would have paid for many surgeries, including the gender reassignment ones. But her psychologist did not give her the necessary testimony. ‘At that time I could have gone up the walls with rage and disappointment. I had already seen my whole beautiful new life before me. Today I think it was good this way. He protected me from something that would have harmed me. Have you ever seen how they put themselves on display with the before and after shots? They would have wanted to show me naked with my masculine body.’

Petra has had the most important stages of her life tattooed. ‘My favourite flower is the peony. It meanders, initially withered, from the groin to the shoulder blade. There you can see the most important stages of my life. Below you can see an angel. That’s me. Next is the date of my coming out, then the day I started hormone therapy. Then the name change, the surgery.’

What is next? What are your dreams?

‘I dream of health and social security. And most of all: about normality. For me and for all transgender people on this planet. Of people starting to finally listen to other people and believe what they know.

And privately I want a nice man by my side who loves me just the way I am and wants to spend the rest of my life with me. Yes, sometimes I am a bit corny.’ 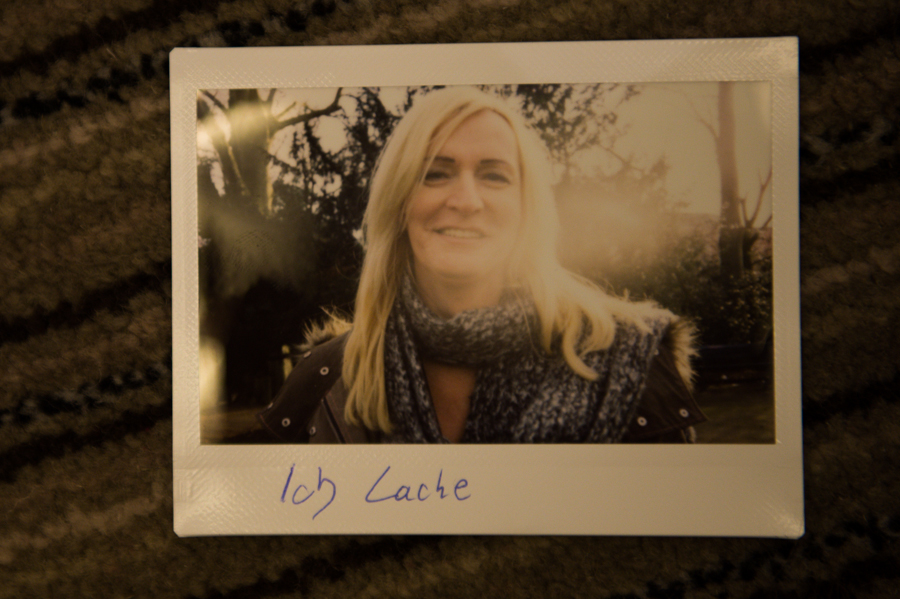